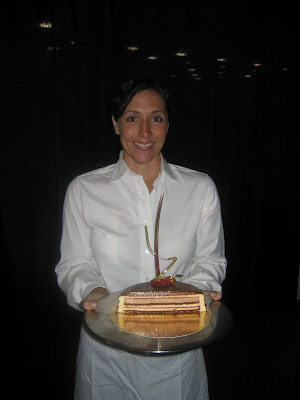 First, scusami for the long break-- I am in Italy!

No, I didn’t run away with one of the Italian pastry chefs. What I am up to back in Italy so soon after my whirlwind tour in July will reveal itself soon enough. Suffice it to say it involves wood-fired ovens in Tuscany and getting paid to cook with people who share a love of fire. But before I get to that, I must finish reporting on the World Pastry Championships at Opryland Hotel.

I think I worked more in those 4 days then I have on anything since completing my dissertation in graduate school. The crucial difference here being that this was actually a lot of fun! I did not get paid and I won’t be on the Food Network anytime soon. But I did get to parade in front of a lot of people and cameras, holding all manner of exquisite confections on outlandish plates before the world -famous and discerning panel of judges and pastry enthusiasts. And I had a ball.

I now understand why legions of volunteers –some of them culinary school students, some food writers, others professional chefs and middle-aged women undergoing a career change—took time off and paid their own way to Nashville plus their hotel for a week, and basically worked their butts off for nothing… just to get to be servers at the World Pastry Championships for a couple of days. (Don’t ask how I walked in off the street and got the job. I’m still trying to figure that one out). 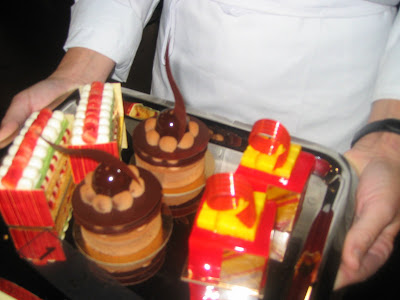 I, too, did all manner of things during that week, from helping to set up the convention stalls for the trade show of industry vendors, to cleaning the boards for the top-secret all-day pastillage making before the competition, to cleaning up the forum kitchens after the week-long classes taught by master pastry chefs were over. I even drove a couple of the Italian team members to get massages and went all over town to find the best lemons and oranges for their practice –all in the name of participating in the “greatest pastry competition the world has ever seen,” (according to Ewald Notter, seen in my previous post).

But the best part was when I got to be a server for the two days of the actual competition—an event more exciting, suspenseful, emotional and melodramatic than I’d ever imagined. 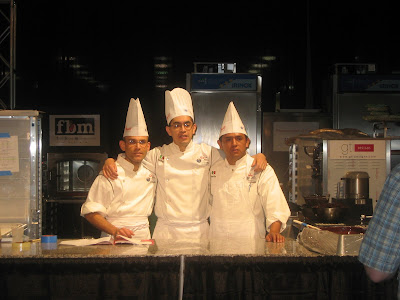 The theme of this year’s competition was Imagination. The teams had their best chefs representing them: Belgium, Switzerland, U.S.A., Italy, Japan, China, South Korea, Mexico and Russia. The Belgians and the Swiss obviously knew their chocolate; the Japanese were the most brilliant in their showpieces (and had the biggest contingent of fans who traveled to see them shine); the Russians were inexperienced but flashy and boasted the only two women in the competition; the Mexicans were the underdogs without sponsors but a lot of heart to make up for it; and the U.S. team, the favorites, were all cocky Frenchmen and the clear favorites to win the competition. 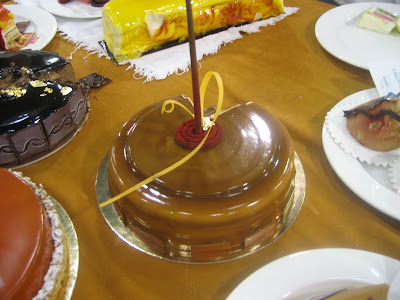 The Italians were clearly the crowd favorite, showing all kinds of passion and artistry, youth and optimism and even making a remarkable comeback after a heart-rending breakage of their pastillage (the hardened sugar that forms 1/3 of the final showpieces) midway through the second day. Despite some difficulties though, theirs were the best tasting of all the desserts, taste closely matching appearance in all of their entries. I know this because as servers, we got to hang out in the backstage area between events, grabbing forkfuls of dessert creations as they were brought back from the judges or the photographer’s tables. Yet another reason for spending 13 hours two days straight as a volunteer grunt.

It was a very close match, and all the teams worked their hearts out for two grueling days of mixing, piping, sculpting and decorating. The winsome Italians made some costly mistakes in the area of hygiene, as well as the use of dry ice in their plated dessert box creation (a non food-safe substance). And it pains me still to say that they came away 8-tenths of a point from third place. Team U.S. A. (a.k.a. Vive la France) won the gold, Japan deservedly won silver and the Swiss team took the bronze medal.

But the Italians will always be the winners to me. Getting to know them, helping them and cheering them on was an experience I will never forget and it inspired me to work harder and continue on the passionate path, wherever that may lead. Exactly that kind of passion is what brought all those people unexpectedly together for one purpose over two days in a convention center in Nashville, Tennessee. And I am so glad I was a part of it.
Posted by Joy of Cooking at 7:53 AM 7 comments