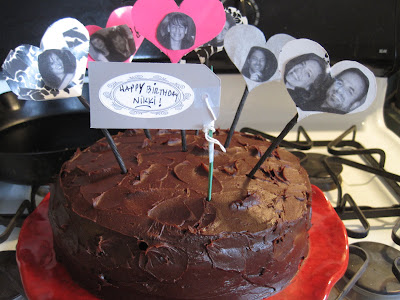 Where has the month gone? I usually love cooking in February because I can do a lot of extraneous baking for Valentine's day, birthdays, because the weather is cold, you name it. This month, I can only think of two or three things I baked. One was this cocoa layer cake for a friend's 35th birthday party. I found pictures of the birthday girl and all of the people invited to the party (thanks, facebook), printed them and made little cardboard hearts to decorate the cake with. I saw something similar on Martha Stewart recently, but when I tried to find it on her busy website I couldn't, so I just made up my own version. I think it came out rather cute.

The cake got lots of rave reviews too, but who doesn't love a rich and moist chocolate cake? I didn't think it was one of my best but I did make it twice this month! 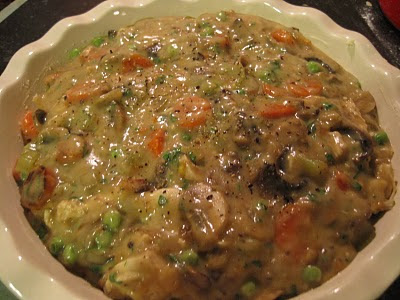 I also made this chicken pot pie recently--a comfort staple. But for all its down home simplicity, it is pretty labor intensive for a weeknight meal if you make it from scratch like I did. I had cooked the chicken the day before and used the leftovers in this. I had also made the pie crust who knows when and pulled it out of the freezer. But even still, it seemed like a lot of work. I guess because there are a lot of elements that are cooked separately and then put together before being baked. Ok, but it *was* delicious, especially when heated up for lunch the next day. 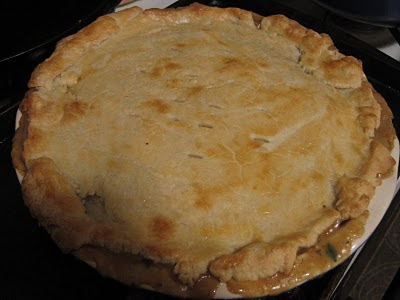 The highlight of this month was a trip I took to Iowa City to visit one of my best friends and her little girl who was born a month before mine. They are new b.f.f.s and it was soooo cute to see them interact and get to know each other as well as to reconnect with an old friend. Here are a few shots of the snowy weekend. 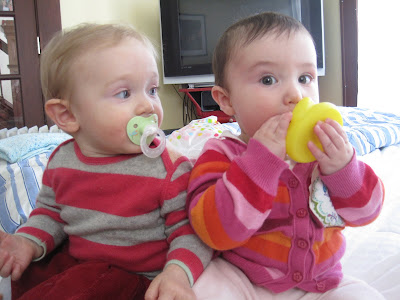 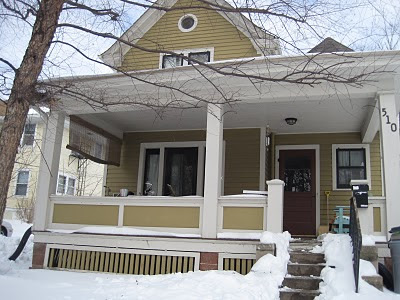 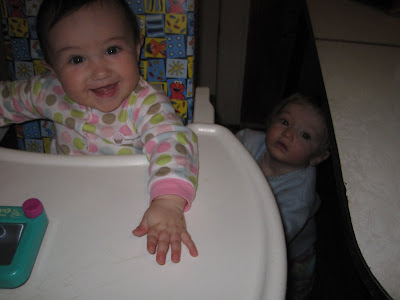 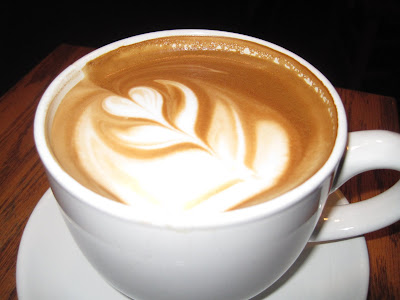 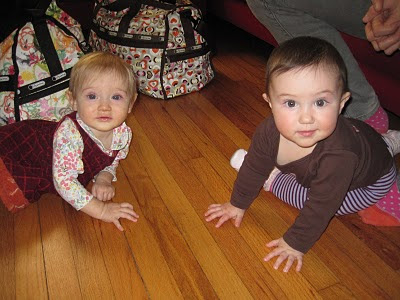 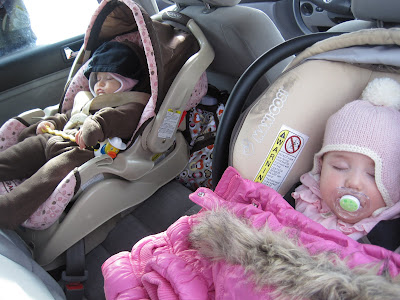 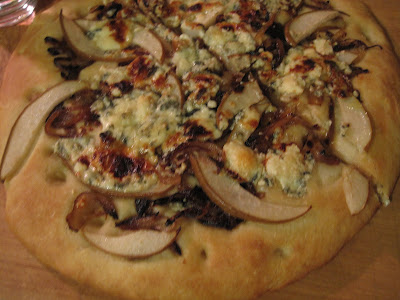 Dinner parties are harder to host now that we have a baby. Unless, as I discovered recently, you invite your friends who also have babies. Last weekend I invited two couples plus their two babies over for dinner. The plan was to have them come about a half hour before they normally put their kids to bed, we'd be ready with pack n' plays and low-lit rooms and we would have a glass of wine, put down the babes and get to partying. It almost worked out perfectly.

I had planned a simple dinner: the focaccia you see above (with carmelized onions, pears and blue cheese, the recipe is here), a winter salad, mushroom and butternut squash risotto and roasted chicken thighs. Oh, and chocolate cake for dessert. All was prepped and ready to go. I was feeling pretty organized and the baby was in a good mood, as if she knew a party was about to start.

About 15 min. before they were supposed to arrive, one of my friends calls with the news that her baby was puking all over the place. These things happen. She was worried and of course, they would not be able to come. I felt bad for her, told her I hoped her little girl would be all right, and went about making a few changes to the menu. One thing I did which turned out great was instead of making a 'real' risotto with arborio rice and standing at the stove for half an hour stirring while everyone else had fun, I put some short-grain brown rice on to boil while we drank wine and ate the focaccia (which was yummy).

I'd already pre-cooked the mushrooms and squash earlier in the day. When we were ready to sit and the chicken was still in the oven, I added some butter and grated parmigiano to the rice and stirred in the veggies. It was not exactly like the risotto I had planned, but pretty close and just as good (*note to self: with baby it is no longer necessary to make a traditional risotto for a dinner party). Even though I've always been a pretty organized cook, doing as much as I can ahead of time so I can enjoy the party, I still am learning new ways to cut corners. 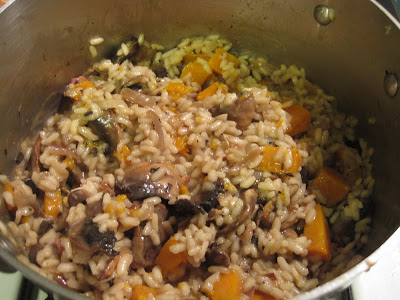 Even though we missed the couple with the puking baby, our dinner was fun and we enjoyed getting to know the other couple. The two babies went to bed without much fuss and never made a peep until it was time for them to leave. (*Another note to self: it's possible to have a dinner party while your baby sleeps as long as the other baby is as good as yours). 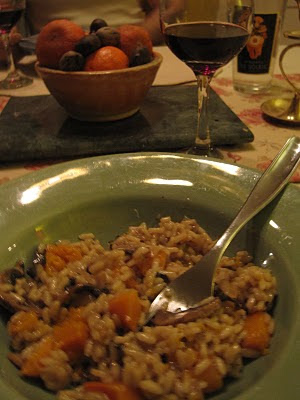 Oh, the chocolate cake was delicious and we ate it for two days, although I have no photo of it. It was rich and moist, a typical buttermilk-cocoa powder 3-layer cake with chocolate frosting. That's the only good thing about the friends not being able to make it: the leftovers.

If you're reading E, we missed you guys!