Soups for the Winter blahs 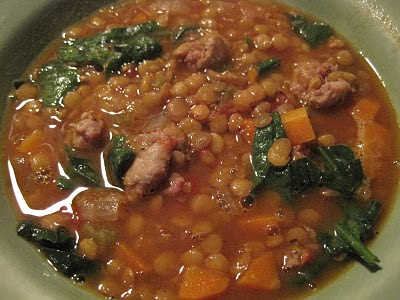 Unless you live in Brisbane, Australia like my good friends Zala and Mark who are enjoying 90 degree beach weather right now (jealous)... 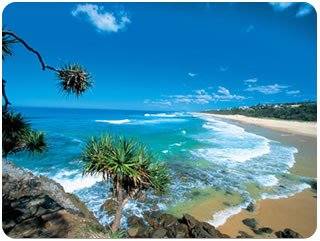 it's the dead of winter in most places. Arguably, this is the most depressing week of the year. The cold, the lack of adequate sunshine and the short days of January combine to make it a pretty dreary month. This must be why so many people look forward to the Superbowl. And after that, at least this year we have the Winter Olympics, my personal favorite t.v. event.

Televised sporting events aside, I have my own ways of brightening up the long winter days in my house. I just heard the local weather lady say we have "a wintry mess" coming up in Nashville over the next few days. This means two things: that schools will close and people will freak out over an inch of snow; and I need to get busy making soups and stews.

All month I've been experimenting with my usual soup recipes. Some of my old standbys include turkey chili, spicy lentil soup and a hearty beef stew. Every time I make one of them, I add or subtract something or do something slightly different.

For example, I used to make a vegetarian lentil soup, which I love. But this year I saw a recipe for lentil soup with spicy sausage and thought I'd give it a try. The hot Italian sausage was the perfect complement to the tomatoes and vegetables. The recipe I used is from this month's bon appetit. 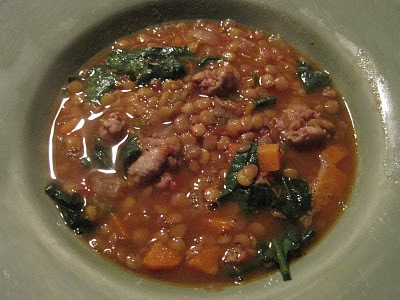 It was a well balanced soup and very healthy (lentils are a great source of fiber, not to mention a fortuitous food-- they are traditionally eaten in Italy on New Year's Day for good luck). I really liked the addition of spinach at the end too, just wilted enough to offer another texture to the soup and a good balance of flavors.

My first beef stew of the winter started off with a nice 3 lb chuck roast that I purchased from Whole Foods. I used a recipe from Alice Waters' The Art of Simple Food as a guide and made a few changes. She calls for using bacon as an added flavor enhancer, but I didn't have any and thought the smokiness might be unnecessary. I was going for a straight-forward carrot, onion and red wine kind of stew. 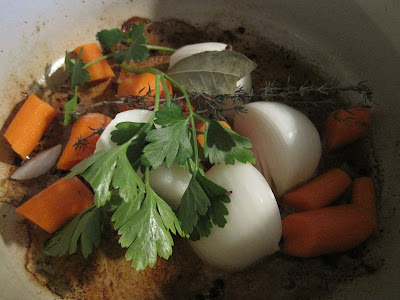 The aromatics were put into the pot after browning the meat and removing it. I then added herbs such as parsley and thyme, bay leaf, a couple of whole cloves stuck into the onions, and a few whole peppercorns. After softening the veggies, I added the cubed beef back into the pot, raised the heat and added the wine, reducing it while scraping up the brown bits from the bottom of the pot.

I then added a small can of whole tomatoes with their juice, a thin strip of orange zest and two cups of beef stock (the orange and cloves were a nice touch). I let this simmer in my dutch oven, covered, on the stovetop for 2-3 hours. After adjusting for salt and pepper, I served it right out of the pot and it was yummy and spicy, but a little on the thin side. But still, a proper beef stew is hard to beat. 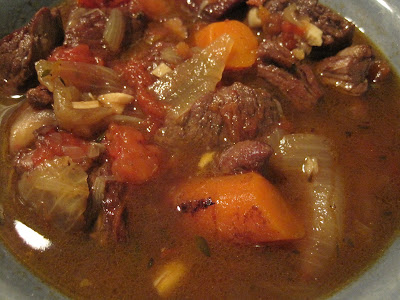 The next time I tried a different recipe, this one from my Jan-Feb Cook's Illustrated. They called it "The Best Beef Stew" so I had to try it. Again, I used a 2-3 lb grass-fed beef chuck roast I bought at W.F. I cut it into small 1-in. pieces before browning it on the stovetop. A curious thing about this recipe is that it called for a tomato paste, 2 cloves of garlic and four anchovies that I mashed up ahead of time and added to the beef instead of the canned tomatoes. It also called for 1/4 cup of flour for thickening. These two steps really made a difference in the final product: a rich, thick and very flavorful stew. It also used red wine and chicken stock as cooking liquids, onions and carrots, and yukon gold potatoes thrown in at the end, as well as a cup of frozen peas, added in the last 10 minutes of cooking. 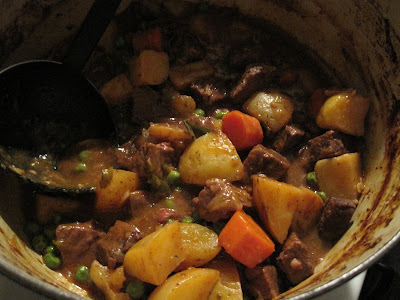 The stew was cooked in a 300 degree oven for about 2 hours, then finished on the stove. The meat was done just right , the potatoes kept their shape and texture and the carrots and peas stayed in tact. I loved how all of the elements kept their integrity, including the meat which was tender, but didn't fall apart. This is because the stew cooks more evenly in the oven as opposed to the stovetop which can make some soups mushy. I'll definitely make this stew again. It was delicious the next day for lunch with a warm tortilla on the side.

So next time you find yourself in the midst of the winter doldrums, I suggest trading in the blues for the stews.
Posted by Joy of Cooking at 12:08 PM 0 comments 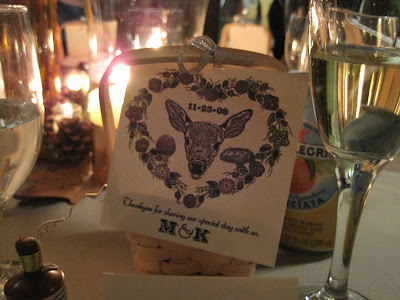 Another year, another blog post-- finally. Wow, it has been way too long since I visited you here and for that I apologize. But you should forgive me once you hear my excuses.

December was quite a month! Even before that, November ended on a busy note. I did my first wedding cake which turned out beautifully. It was made for some friends, new to town, who had a lovely and intimate Fall wedding at their home. People came from as far away as New Zealand and Ireland and a good time was had by all. The cake was really special: a dense almond cake with a almond dacquoise layer and a layer of apricot glaze and almond buttercream frosting. We decorated it with handmade marzipan fruits, acorns and berries and finished it with two woodsy animals on top. The couple loved it! 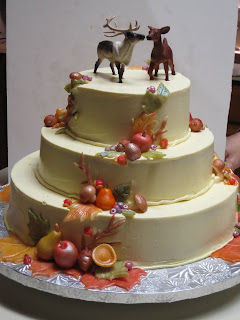 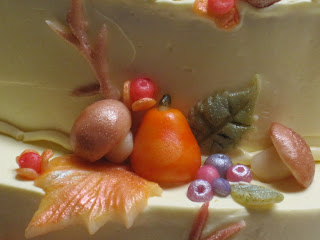 Then, there were the December parties: like the staff holiday cooking party with my friends at Crema at which we made homemade pumpkin-stuffed ravioli with butter and sage, among other things. 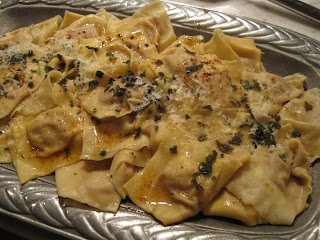 I also catered a party for my friends Ross and Jimmy and did a barrage of Italian antipasti like bruschetta with prosciutto and figs, wild mushrooms and fontina, a bagna cauda with crudités,and little meatballs with spicy tomato sauce. I was so busy that night I didn't take one photo.

And then came the usual December baking frenzy. I made so many dozens of holiday cookies I couldn't even find time to make any for my family! They were not amused. But I did make a lovely orange chiffon cake for Christmas Eve dinner. And I cooked with my brother on Christmas Eve which was fun. We managed to make a fabulous 3-course dinner for 16 people including homemade ricotta and spinach ravioli with tomato cream sauce, a spectacular 14-lb salted and spiced pork roast from Heritage Farms, and the most amazing potato and celery root gratin which my brother makes at Minetta Tavern in New York. The whole meal was wonderful and the time spent with my family the most important thing.

And then there was the surprise... (actually two surprises)

Which I humbly present to you here by way of apology for my extended absence.

So 2010 is going to be a big year for me. It's all very exciting news and we are over the moon. Happy New Year everyone.

Next post: my New Year's Day lentil and spicy sausage soup. Can't wait to get back in the kitchen!
Posted by Joy of Cooking at 6:09 PM 1 comments