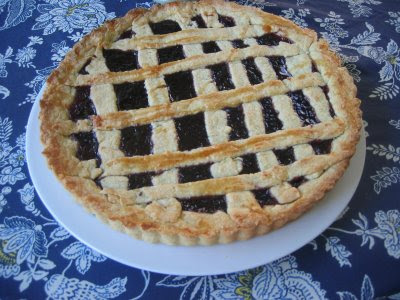 There is something so simple about Italian desserts. If I come across a new "Italian" dessert cookbook and the recipes call for multi-stage cake baking or lots of hard-to-find ingredients I know it's not really Italian. Because in my experience, the Italians are fans of homemade, rustic desserts. The ones your nonna used to make. And those are the same ones that Italians repeat over and over at home, as well as the ones you will find in a good Italian pasticceria.

Now, don't get me wrong. There are regions in Italy where pastry is a tradition involving skill, artistry and technique, rivaling that of the French pastry tradition. These are mostly in the South - cities like Naples, Palermo and Siracusa in Sicily. 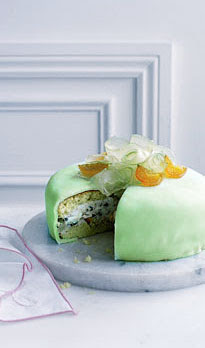 But in the rest of Italy, pastry is not an elevated tradition, but more a tradition of simplicity and seasonality. 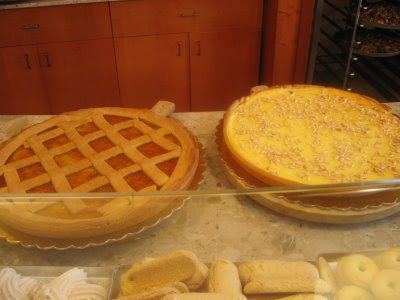 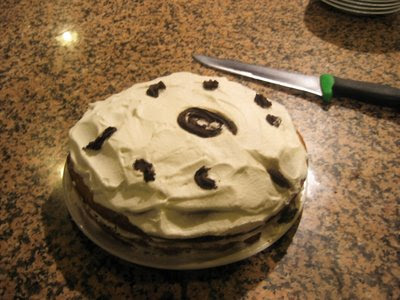 That is why this 'torta di marmellata' speaks volumes to me about Italian desserts. It's not overly sweet, nor is it ostentations or decorative. If this were art history, it would be Medieval rather than Baroque. It says "anyone can make this," or "just use whatever fruit is growing in your backyard," or "give me an espresso and a piece of crostata and I will give you perfection. 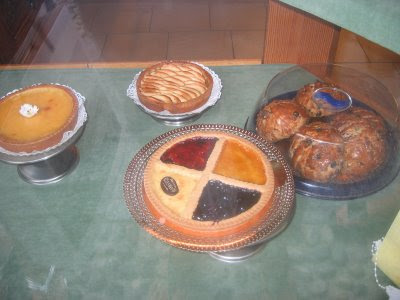 getting a little fancier but still rustic crostate

So I first learned of the crostata (Italy's version of pie you could say) while hosting my good friend Betty Bottoni (yes, that's Betty Buttons) on her first visit to the U.S. to see me. We met in 1997 in Urbino where she was studying journalism and I was passing through after helping direct a study abroad program in Perugia. We became fast friends and she invited me and a few other straggling foreigners to her apartment for dinner that night where her mother, visiting from her town in Lazio near Rome, cooked what was probably a fabulous meal in the tiniest kitchen imaginable. Betty's mom is a wonderful Italian home cook. I have learned a lot from her over the years.

In fact, I am sure that Betty's crostata probably hails from her mother's kitchen, one in which there is always a jar or two of homemade jam left from the previous summer. (Right now I have a jar of grape-strawberry in the fridge and my favorite, fichi-cacao (chocolate fig) in my cupboard from the last visit to Rome. Betty's mother always sends me home with marmellata and various other jars of homemade goodies.

You get the idea. The real Italian sweets, the kind your mom makes, are made with whatever you have on hand, which is why so many of them involve seasonal fruit. And always, a short crust, or 'pasta frolla'- heavy on the butter, light on the sugar.

There are as many recipes for the pastry as there are for pie crust, varying only slightly, so go with what works in your kitchen. But here is one I return to again and again, given to me by Betty so many years ago. It's still written in Italian so forgive the estimations on equivalents. Like I said, it's not so much about precision as it is presentation. Take this to a party and people will think you're an expert baker.

Mix as you would pie crust, divide in half, wrap in plastic and chill at least one hour, up to one day. Roll dough out on floured surface, transfer to 9-in tart pan, or whatever you have, and press into sides. Stir jam or (cooked fruit), lemon and almond extract in bowl to blend. Spoon filling into crust in pan. Roll out remaining dough and cut into strips. Arrange them on top any way you like. Seal strips to crust and trim edges. Bake tart at 350 until golden, about 50 min. Can be made a day ahead. Cover and serve at room temp.
Posted by Joy of Cooking at 9:13 AM 2 comments 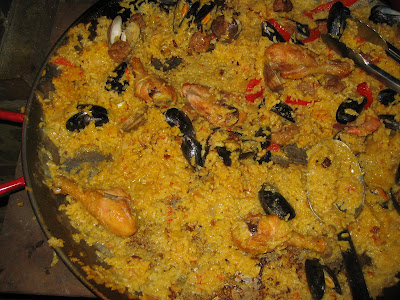 It is not every day that I get to throw a backyard party for my man's birthday (a milestone one this year, but I'm not saying how old --or young!) I thought the occasion merited an all-out grand celebration in the tradition of the Spanish who, in my opinion, are some first-rate party people.

My man also loves paella. He loves anything that combines shellfish, chicken and pork. And this was no ordinary paella. I took my inspiration from the parties I'd seen on the beach in Spain where men cooked paella in pans 5-feet wide on an open fire and served it up right on the beach. I decided I would make the most authentic paella that has probably ever been seen in Nashville, or at least in my backyard.

We have one of those old BBQ pits made of bricks, now crumbling with the weight of time and neglect. Who knows how long it's been there. You don't see them too often anymore. When we moved in, we cleaned out all the vegetation that had grown around it, cleared out the snakes and slugs from inside, and I vowed one day to turn it into a pizza oven. But this seemed like the perfect reason to fire it up and see what it could do.

Originally from Valencia, though now cooked all over Spain, paella is traditionally cooked on an open fire in a wide, shallow pan that is the namesake of the dish ('paella' means skillet in Spanish). That time I saw it being made on the beach in Andalucia was almost 15 years ago. I got a recipe then, bought a paella pan, and made my boyfriend at the time cart it all over Spain with us, tied to his backpack. It made it all the way home and through several moves, but alas, I had to give it up a few years ago when rust and lack of use made it impossible to clean. 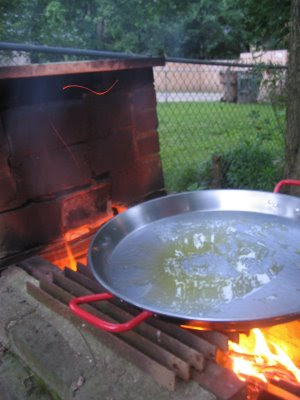 Enter the age of Internet shopping. Three days before the party I had a 22-inch traditional paella pan on my doorstep. So big it could only be used on a fire outdoors, it promised a night of exciting food preparation and just a little bit of intimidation, since I'd only ever cooked paella inside on the stove. But I'm always up for a culinary challenge. 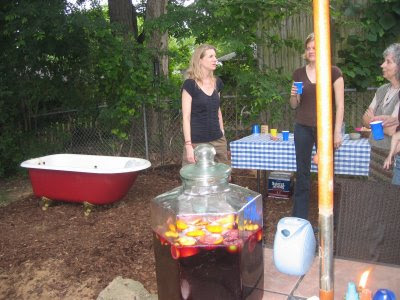 We filled the bathtub (the one waiting in our backyard to go into our newly renovated bathroom) with ice and beer, a great use for a bathtub. I also made a huge jar of sangria with my dad's secret recipe from his restaurant days when he tried to bring tapas to Las Vegas about 20 years too soon. For apps I made little chile corn custard cakes topped with sour cream and salsa (they went too fast for a photo), and a refreshing gazpacho served in little painted espresso cups (again, this is an after photo. It really is hard to take pictures and host at the same time, but thanks to Robin for getting the job done!) 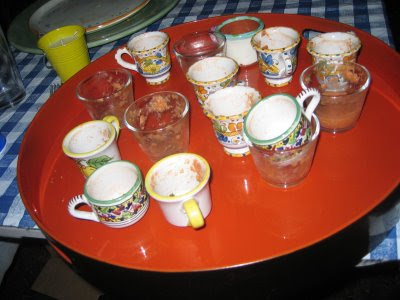 Then the show began. Lucky for me, a good friend was invited who also happens to be a great cook and a take-charge kind of guy. He and some other guys got the fire started with wood and then built it to a roaring flame. With everything in place, including 2 lbs of arborio rice, 12 cups of chicken stock I had made the day before, 24 pieces of chicken I had baked earlier in the day, and the seafood: 2 lbs each of prawns from the Gulf, newly arrived little neck clams and mussels, plus 2 lbs of hot Italian sausage, sliced red peppers, onions and garlic, and the essential saffron threads, we were ready to start cooking.

(Note: when undertaking something like making paella for 25 people, the key is early preparation. Had I not done all of the prep earlier that day and the day before, there is no way I would have been able to pull it off.) 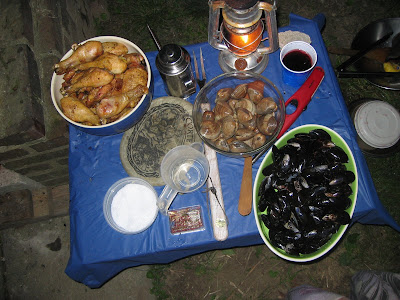 First, we browned the sausage in the hot pan with olive oil, then added the peppers to soften, before removing them both to a plate and adding the aromatics, onion and garlic. 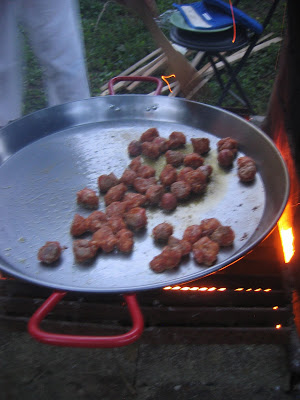 Then a few chopped tomatoes were added, before the rice went in dry at first to lightly toast it. Then the broth that had been boiling on the stove inside was brought out and added little by little to the rice along with the saffron and seasonings, and allowed to simmer at a slow boil. It took a little while and some major heat to cook that much rice but it's essential to let it cook and not stir it much. Rotating the pan from time to time makes it cook evenly. 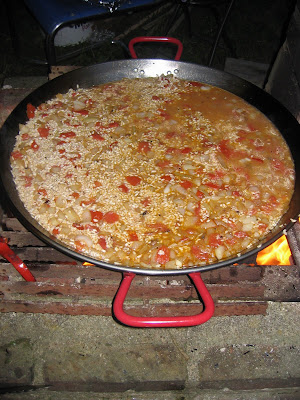 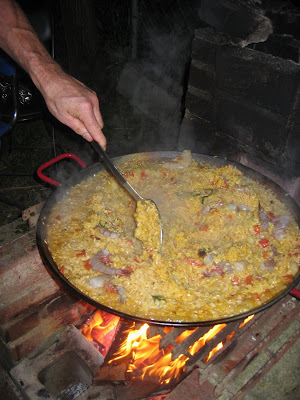 When it was almost done, that's when everything started to happen: we threw in the shrimp, then the clams and mussels, the chicken and sausage spread out on top, and the peppers sprinkled throughout. It really was beautiful and exciting to make.

People lined up at the paella with plates in hand and I dished it up with lemons on the side and french bread to soak it up. It had just the right combination of flavors and the saffron was not too strong. The fire definitely gave it a smoky flavor that you just don't get doing it on the stove. 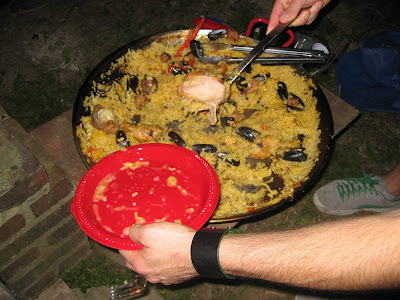 Everyone raved about it and went back for seconds and thirds. It really was an authentic paella. I think he was happy. 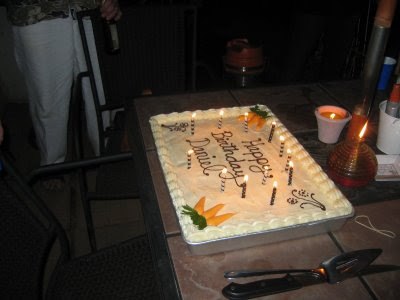 Of course, there was a homemade birthday cake to top it off. A carrot cake with orange-flecked cream cheese frosting that could feed an army- and did! It was just the thing to end a perfect backyard paella party.
Posted by Joy of Cooking at 11:14 AM 7 comments