Thanksgiving 2013, the old and the new 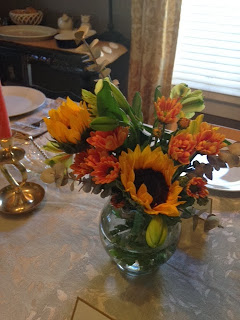 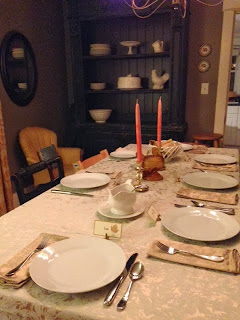 I have been lucky to grow up in a family that loved and celebrated the holidays and instilled in me a sense of the importance of traditions. My mom would work her tail off cooking, baking and entertaining family and friends--all while working full-time and raising three kids--and somehow made it look easy. And although I may not have shown my appreciation then, I now find myself wanting to do the same things for my family. When I have the energy. That is once or twice a year.

This year I hosted my husband's family at my house. Every year we do something different for Thanksgiving, sometimes spending it with friends, sometimes at my in-laws' cabin. I hadn't done Thanksgiving at our home in East Nashville ever (is that possible?) so it was high time. 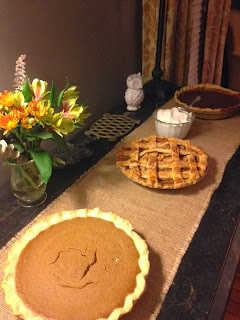 I had a lot of fun preparing, baking and cooking. Mostly the baking.

I admit it. I went a little crazy with the pies this year. Not that I don't always go a little crazy with the pies (last year I think I made 8) but my oven broke at the end of the summer and it took me two-and-a-half months to fix it. I, mistakenly it turns out, thought this was a sign that it was time to buy a new one. We are planning to remodel our kitchen fairly soon, so I started to do some research and look at options. Then I found out that the ovens of my dreams cost between three and five THOUSAND dollars. I called the repairman instead.

With my oven back in action, I had pent up baking energy that needed to be released just in time for Thanksgiving. Since I love to bake, I usually end up doing the pies. Plus, I was also doing the turkey and a few other things too, so I started planning early. 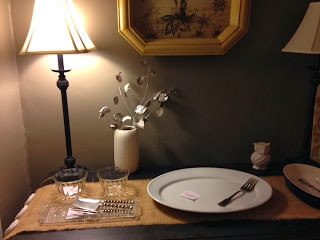 Following in my mom's footsteps (she was an extremely organized planner), I set out all the serving dishes two days before with a note on what would go in them. Before you start making fun of me, and believe me I know it's crazy -- I used to make fun of my mom for this--but I realize now why she did it. Not only is it fun and it gets you in the spirit, but it allows you to see what you have and what you still may need. And then I go thrift shopping to find it. For example, I needed a gravy boat and a coffee server and found both at Goodwill, along with some cool little glass bowls for cranberries and a glass dish for apps. Score.


I decided to try some new things instead of the old standards, like a collard green gratin that is sure to reappear in future years. I was also inspired by a beautiful spread on non-traditional Thanksgiving pies in the November 2013 issue of Saveur magazine. I decided to try three of them. I love trying new things, especially when it comes to baking. 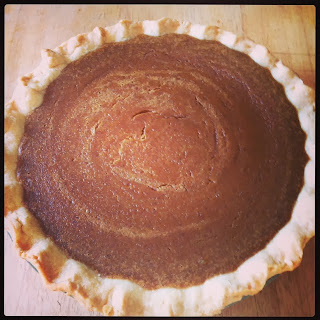 Instead of pecan and pumpkin I made a chocolate-ginger-chess and a pumpkin-maple brulée (in the end, though, the brulée part never happened but it was still delicious).

My secret to pie dough is in the combination of shortening and butter-- and I do it in the food processor so it's fast. But chilling --both the dough before rolling for at least an hour and the crust, in the shell and crimped, for about 30 minutes-- is the single most important way to achieve a pretty-looking pie. 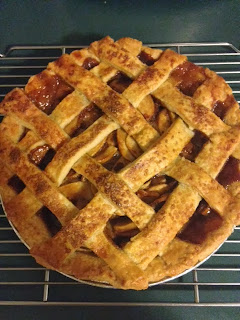 The salted caramel apple recipe (adapted by Saveur from Four-and-Twenty-Blackbirds in NY) was the perfect combination of sweet and salty, fruit and spices and called for a teaspoon of Angostura bitters added to the apples. At first I thought this was strange, but it was actually genius. I had never heard of that but I'll be adding it to all future apple desserts.

I love the lattice crust, even though it made me have to think too hard when putting it all together. After making and filling the pie, the recipe calls for making a caramel on the stove top (sugar, water, butter and heavy cream) and then pouring it over the apples. If you think "that's overkill" or "it's not worth the extra work," think again. It was amazing. Then brush the crust all over with an egg wash and sprinkle both sea salt and Demerara sugar over the top. It's a dramatic pie that tasted as good as it looks.

Some traditions are meant to be broken. I don't think I'll host Thanksgiving again next year (my mom used to do it every year). It's soooo much work and maybe I won't have as much time on my hands as I did this year. But I will probably bring the pies.