two end-of-summer salads and a dessert 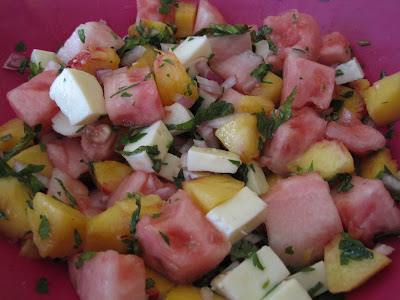 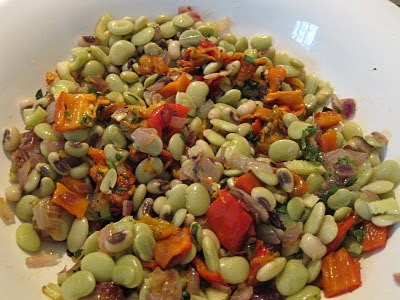 This summer seems to have blown right by me. Granted, being pregnant and then having a baby at the beginning of it could possibly be the reason. But still, life seems to be just getting back to some sort of new normal and the season is about to change. I've missed out on some cooking! I have to say, though, that the record heat and humidity we've had in the South makes me long for the cool evenings and brisk morning temperatures of Fall, which is just around the corner.

On the other hand, I am still loving the tastes of late summer, like fresh farmer's market peaches and juicy watermelon. I recently made two delicious salads and a last-minute easy dessert that were some of the best things we've eaten lately.

The first salad is a black-eyed pea and butter bean salad, inspired by one I saw in the September issue of Food and Wine which is devoted to Southern food. I live in the South and I have experimented with black-eyed peas only one other time and that was for the traditional Hoppin' John New Years dish. It was okay, but I still didn't love them. This salad, however, made me a convert.

I had been given a mixed bag of butter beans and black-eyed peas last year by a sweet old neighbor friend. She often comes over unannounced bearing gifts from her garden which she knows I appreciate. This, however, was one that I threw into the freezer, not knowing what to do with these two staples of the Southern pantry but too embarrassed to tell her. A few weeks ago, I pulled them out and made this salad. 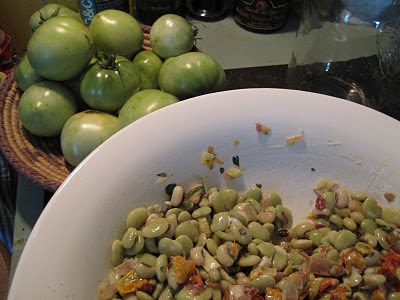 It was created by Atlanta chef Kevin Gillespie in a feature on meatless dishes. Here is the recipe. I pretty much stuck to it and it was delicious. Initially, I didn't want to take the time to cook the ingredients in the salad first, like roasting the peppers and sauteeing the onions and celery. It seemed like too much work for a salad. But the flavors of cooked vegetables are so much more interesting and really deepen the notes in this dish that ended up being more like a main than a salad. 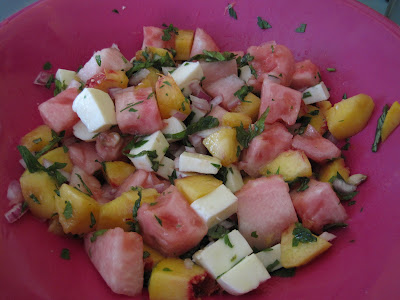 The second salad I just made up and it was so yummy, on its own for lunch, or alongside grilled chicken or steak for dinner. It combines the sweet and salty flavors of peaches, watermelon, mozzarella and herbs. In addition to the fruit, I added a little lime juice, some fresh herbs like parsley and basil, a little olive oil and some honey drizzled over the top. I may have also added some heat in the form of one diced jalapeno at the last minute. YUM. I will make this one again to bring to an outdoor party or cook-out. It was so easy but also satisfying and complex. 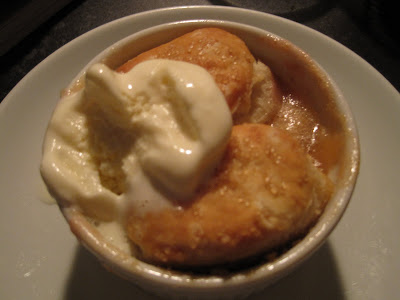 And lastly, this is something I came up with in a last-minute dessert craving after some meal I don't even remember. I had two peaches lying around so I peeled, cored and sliced them and tossed them in a bowl with 1/4 cup of flour, a tablespoon of cornstarch, some sugar, the juice of half a lemon and a pinch of salt. Can you see where I'm going with this? I then pulled out some little frozen tea biscuits that someone else had purchased because I always make my own (ha ha), spooned the peach mixture into 3 ramekins, placed two biscuits on top of each and sprinkled raw sugar on top. Baked in the oven at 350 for 30 minutes, they came out looking fabulous and, with a dollop of vanilla ice cream, tasted even better.
Posted by Joy of Cooking at 2:09 PM 0 comments