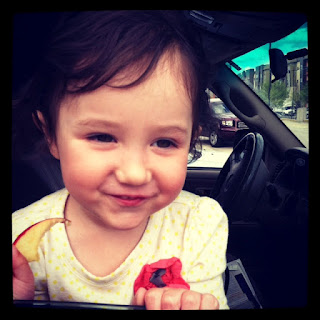 We took a short but fun little road trip last weekend down to Atlanta. It was my third time there, each trip only lasting a couple of days, but with each one I've come back with an appreciation for the major metropolis just Southeast of us. It's only a four-hour drive away, so not that much of a stretch to go for the weekend. And the city has so much to offer.

The reason for the getaway was a trip to IKEA for some things we needed for our rental property. Now that it's getting down to the wire, we are outfitting the three units in our rental house with new appliances, kitchen cabinets and countertops, the latter of which we wanted to buy at IKEA. They have a great selection of unique materials (mostly laminate or wood) for a really good price. 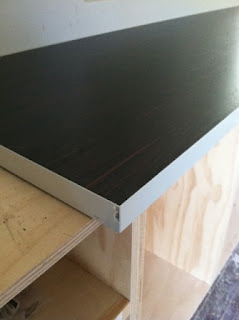 (this is one of them)

Let's just say the store was a bit overwhelming. It was our first foray into the world of the Swedish home goods mega producer of things you never knew you wanted or needed and I don't feel the need to go back anytime soon. I thought Daniel was going to have a heart attack by the time the third hour wore on as he tried to follow me as I weaved in and out of all the stuff and throngs of people, all the while pushing the cart with June and trying to keep her entertained. I will say that the store is very well-equipped for children as they have all these little toddler play stations set up all over that really came in handy when it was getting close to meltdown time. And the family restrooms were amazing. 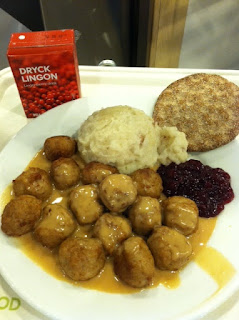 That being said, it would have probably been much easier to do this shopping trip without a toddler, but whatever. We got it done, she had fun (mostly) and then we went on to enjoy ourselves in Atlanta. And we had a fun little lunch there of Swedish meatballs and smoked salmon that were pretty good and lingonberry juice, which just makes us laugh every time we say it. 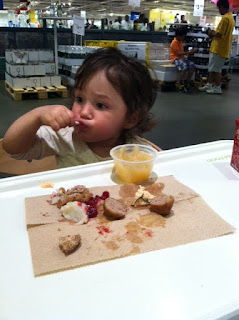 Our first meal was dinner at Cakes & Ale in Decatur. I had been hearing about this place since my last trip to Atlanta about four years ago (during which I ate some pretty great food). I didn't have the chance to go then, so this time it was still high on my list. We weren't able to get a reservation, but they offered us the patio which ended up being perfect. The weather was beautiful and there was only one other table of nice people out there and June could play around a little and not be disruptive.

We had some much-needed drinks after that horrendous shopping experience and finally started to relax. Then we shared a plate of oysters that were excellent and an appetizer of arrancini (little fried rice balls) that were okay but not as good as I've had elsewhere. 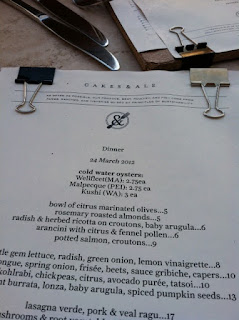 I had steelhead trout with spring vegetables for dinner and Daniel had a nice plate of lasagne verde with pork ragù. His only complaint was that it was too small. Mine was perfect. June had a yummy farro salad with root vegetables which mostly got eaten by us. 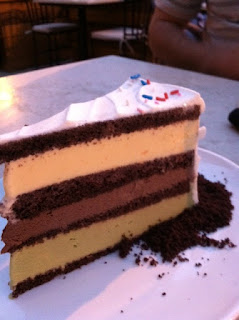 And for dessert we all shared a slice of this beautiful ice cream cake which practically made our our daughter flip her lid it was so good. I wish I could have eaten all the desserts on the menu. The restaurant also operates a bakery next door and it looked like everything they made there was over-the-top delicious. I wanted to go back in the morning, but they were closed on Sundays. Dang.

Instead we had breakfast at Ria's Bluebird (blogged about before, see above link) which is always a fun place. But this time, we had to wait just a little too long and the service was very slow. The table next to us sent their pancakes back because they were cold and while I wouldn't go that far, our food was not the best. I wish we would have gone out of the way a little further and tried brunch at one of the two other places I had in mind (Empire State South or Miller Union). Next time. 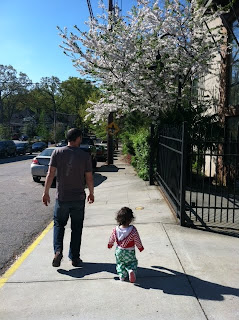 Sunday was spent making June happy since she had been such a champ the day before both in the car and at the mega store. So we went to a beautiful park right in the center of the city called Grant Park and played on the playground and then ended up at the Atlanta Zoo which is just at the south entrance to the park. It was a beautiful Spring day and the zoo was fun -- the panda bears were the highlight for me. I think June enjoyed all of it. 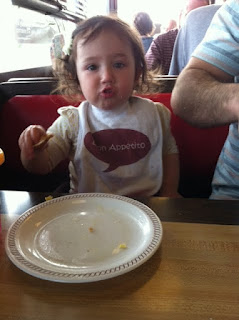 And no trip to Atlanta would be complete without a stop at Waffle House. Started in a suburb of Atlanta more than 50 years ago, it's a staple of Southern road trips. And, as much as I hate to admit it, their waffles are pretty amazing --especially the pecan waffle, served with a side of hashbrowns "smothered, covered and diced" (with cheese, onions and...I forgot what else that means). June had a good old time there and could have stayed there all weekend. 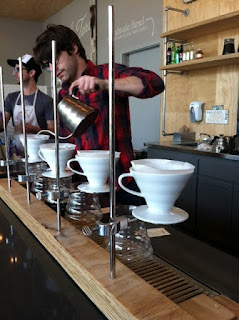 Oh- and just before hitting the interstate to head home on Sunday, we accidentally found one of the coffee shops that had been recommended to me by my friends at Crema. Called Octane, it was a beautiful new, airy garage-like space with a super cool pour-over station and an attached bakery called The Little Tart. All I had was an iced pour-over, but it was really good. I should have grabbed some pastries for the road, but thought better of it. Second mistake. Next time, we'll do breakfast and coffee there.

Now that we've had a taste of what a little getaway trip can do for the psyche, we're all ready to hit the road again. We're hoping our next adventure will include some water and sand.
Posted by Joy of Cooking at 2:39 PM

Email ThisBlogThis!Share to TwitterShare to FacebookShare to Pinterest
Labels: travels